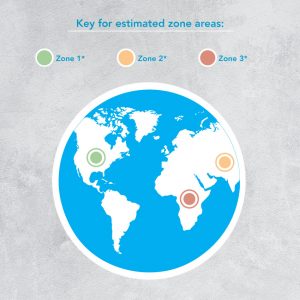 An illustration of the global climatic regions which affect vinyl durability

Vinyl films come with a durability that is stipulated by the manufacturers of the film.

However, there are factors that may affect this stipulated durability, and you may find that the vinyl may not last as long as the packaging suggested.

Do not fret, you have not been scammed! This is perfectly normal and occurs because of the climatic region that you are in.

The durability listed on the packaging is usually set according to European standards, which have less harsh climatic conditions.

The durability of a PVC film is generally determined by three major factors. They are the additives in the film, the environment in which the film is used and ink (in the case of printed film). As previously mentioned in our 2018 article, the angle at which you display the signage is also a factor to consider.

“Vinyl on a horizontal surface will never last as long as vinyl on a vertical surface,” says our sales development coordinator, Andrew Cromberge.

However, this article will primarily focus on how signs are affected by the climatic region/environment in which are displayed, as the regional climate of a country is the main factor which will reduce the expected performance.

“Every country falls into a specific zone based on its climate. Your vinyl will not fail as badly in the cold as it would in the heat,” suggests Cromberge.

In the world of signage and graphics, the world at large is divided into three climatic zones:

The sun and UV rays are factors that will damage the media. Cromberge also notes that in the Sub-Saharan climate, the sun’s rays are very strong and cause fading and damage of the media.

As for how this and the angle of exposure affects the durability of the vinyl in terms of years, well, Ralph Wordon has a pretty good example.

“The cumulative effect of the zone change and the angle of exposure can shorten the life span of a PVC film with 10 years’ vertical durability in Zone 1 to just three years non-vertical in Zone 3,” says Wordon.

Read the manufacturer’s product data sheet and take into consideration the zone in which the media will be situated, when approximating the durability of a pressure-sensitive film. Black and white usually have the longest life expectancy, while clear, opaque and metallic colours are known to have a shorter life span.

With these key factors in mind, you will be able to make well-versed product recommendations to your customers. It’s important to select the correct type of film and a durable brand.

“In a harsher climate, use a high quality vinyl. A cast vinyl will last longer than a monomeric or polymeric vinyl,” Cromberge highlights.